Previously, in my Livejournal, I gave you my Ships of the Noughties and Twentieth Century Ships lists. Well, a decade has passed since my Noughties list, a decade full of romantic, fun, heartwarming, and occasionally heartbreaking new ships for me to enjoy. So I have a new list to present for your reading pleasure.

As usual I found myself with far more potential couples than I could possibly include and so I may have gone slightly overboard with the honourable mentions list. I just couldn't bear to leave any of them out!

Once again I am not doubling up, so Mulder/Scully, Grissom/Sara, Tony/Ziva, Michael/Sara, Booth/Brennan, Barney/Robin, and Chuck/Sarah are not included because they're already on my Ships of the Noughties list. Although I was tempted to treat Prison Break's return like a new show and include Michael/Sara again, mainly cos when I wrote the first list Michael was supposed to be dead but it turns out he wasn't. (Shocking, I know...)

Anyway, here is my Ships of the 2010s list. Starting with the ones who didn't quite make the final cut:

And now, the main event: 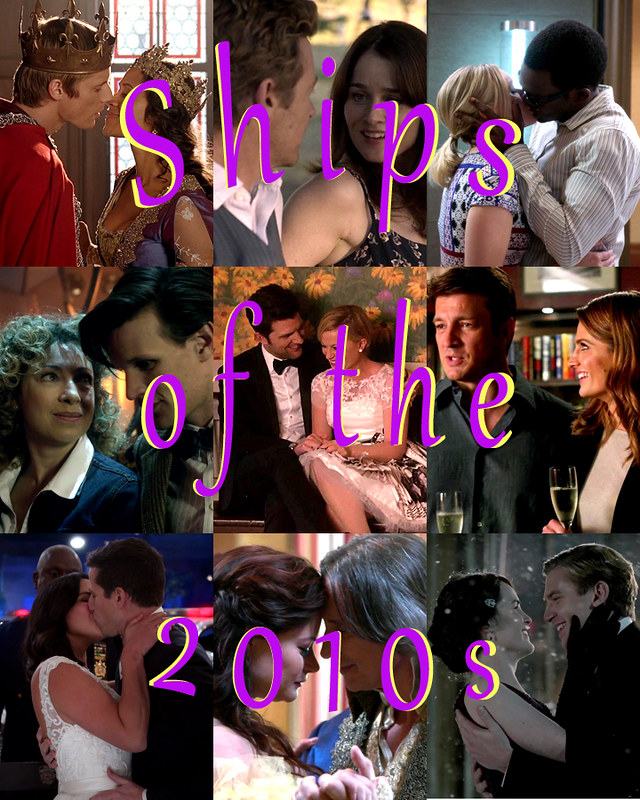 rachg82 has suggested that I talk about TV, a subject which is very close to my heart, so I'm going to give it a go:

Annoyingly I have fallen behind in a lot of my TV watching. The new series of Bones hasn't started here yet and doesn't look like it's going to any time soon. I might try and find it online and catch up with the new episodes over the weekend.

I'm also about a season behind with NCIS, although I'm going to have to skip ahead and watch the upcoming episode with Alex Kingston in because it has Alex Kingston in and I will need to see it in order to properly flail with everyone on Tumblr.

I'm still not entirely happy with Merlin. But despite all my talk of giving up on it I'm still hopeful that it may pull it all back and wow me with a brilliant resolution to this storyline that makes up for all the crap it's putting me through now.

No new Doctor Who until Christmas. I absolutely loved the minisode and trailer that were shown on Children in Need last week. I'm so excited to see Jenna as the new companion and to find out how Clara and Oswin are going to be explained. I'm still hoping that they're the same character, but I also don't want Oswin's death to be Clara's end. So who knows what I want.

I've downloaded three episodes of American Horror Story: Asylum but haven't actually watched them yet. They're on the Sky box so I have to watch them in the living room and it's really not the kind of show I want to be watching when other people are around. Which is pretty much all the time. I shall have to work something out.

Recently we've been watching Elementary. It's good. I like it. Very different to Sherlock and, to be honest, other than the fact that the main character is named Sherlock Holmes it doesn't really seem related to the Sherlock Holmes stories at all. It's just another American drama series. Not that that's a bad thing, of course.

Downton Abbey finished a couple of weeks ago. I miss it already. I'm also worried that after that lovely, non-heartbreaking end to series three, which left everyone relatively happy and settled, the Christmas special is going to be full of misery and death. I don't trust that Julian Fellowes.

Right, well, I think that's everything for now. TV is fun.

I finally caught up with last Saturday's Merlin and I'm not sure how I feel:

And this is why I don't write TV reviews.

I've finally caught up with the latest episodes of Merlin and now I has a sad.

They better fix this. *shakes fist*

Uh, weather? A word, please? You may not have noticed this, but it's autumn now. It's going to be October in two days. So what's with the summeriness? While I'm sure all this bright sunshine, clear blue skies and soaring temperature would have been lovely a month ago, it's not really appropriate for now. My coat is feeling sad and unloved. I'm sure you understand.

Speaking of autumnal things, Saturday is going to be an awesome day for TV! Last episode of Doctor Who series six and first episode of Merlin series four on the same day! Plus I plan to finally get around to watching the third episode of Sherlock, so it's going to be a trifecta of brilliant British television.

Also, Strictly Come Dancing! I'm seriously just going to set up home on the sofa and not move for hours.

And then, on Sunday, I can watch Tumblr explode.

Oh yeah, I have a Tumblr now. Tumblrs are cool.

ATTENTION FANDOM-LOVING FRIENDS WHO ARE NOT ALREADY OVER AT FANDOM MARCH MADESS! GET YOURSELVES OVER TO FANDOM MARCH MADNESS! THE PRELIMINARIES ARE OPEN AND PEOPLE NEED YOUR VOTES!

IF YOU ARE UNSURE WHO TO VOTE FOR, I OFFER THE FOLLOWING SUGGESTIONS:

THERE ARE MORE, OBVIOUSLY, BUT I'M NOT GOING TO BORE YOU WITH ALL THE CATEGORIES NOW. BEST THING TO DO IS GO THERE AND SEE FOR YOURSELVES!

Hey, everyone! Time for my New Year's memes. My answers this year are more upbeat than I can ever remember them being previously, which has to be a good thing!

Oh Merlin, why so awesome? Very excited for next week's episode!
Collapse