Yes, this is another post about decluttering. Probably of interest to absolutely no one but myself but this is my journal and I want to keep writing about it so I can see what progress I'm making and keep myself accountable. Otherwise I feel like I could easily slide back into not bothering any more. Clutter blindness is a real problem!

I tried selling some books on Ziffit but it was just too much hassle, especially when they didn't want about 80% of them, so I found a book donation point instead. I took four boxes of books there the other day, which was good. I like it too cos it says that anything they can't sell they recycle, so I don't have to worry about the condition of the books either. I did end up keeping more than I probably should have, which felt like a bit of a failure, but I have such fond memories of reading those Horrible Histories books that I didn't feel I could get rid of them.

I've also cleared out some stuff from under my bed, including a basket of stuff that must have been there for years. I feel pleased about that, but of course it doesn't look like much of an accomplishment cos this stuff was all hidden away anyway. I suppose I could use this newfound space for other things that I want to keep, but then I run into the danger of forgetting about them too. Maybe it would be a good place for schoolwork.

Schoolwork is something that has been giving me a lot of problems when it comes to decluttering. I found it easy to throw away my old college work cos I was depressed and struggling for pretty much my whole time at sixth form so I had absolutely no interest in looking back at anything that reminded me of those days. But schoolwork is a different matter and brings back different memories. Part of me thinks I should just get rid of it cos it's completely useless and just taking up space, but it's also irreplaceable. I've managed to make myself get rid of a lot of things that I don't really need by reminding myself that I can always just buy it again if it turns out that I made a mistake, but that's not the case here. Once that schoolwork is gone then it's gone forever. So I'm finding this quite difficult.

I took more clothes to the donation bin, although again not as many as I would have liked, but it's another step in the right direction. And I've bagged up quite a lot of small electricals to take next time.

I also gave my shower head and grouting a proper clean. That's not really related to decluttering but I still consider it an accomplishment. And now my bathroom smells of vinegar.

The decluttering is coming along slowly. I know slow progress is better than no progress, but I still feel bad about how much I end up keeping. I managed to clear out about half of my goth-y clothes and took them to the donation bin, but I couldn't bear to part with the rest so they're now bagged up and just sitting in a corner mocking me with my failure.

I did get rid of a load of old sixth-form college work, so that's a success. I glanced at some of my physics notes and wondered how on earth I ever understood any of it in the first place. It's definitely not anything I'm going to be using again! And as well as my actual work I'd also kept pretty much every piece of paper ever given to me so, you know, if anyone is interested in applying to university in 2002 I have a lot of literature that could be useful to you. Although you will have to go through my recycling in order to get it...

I also threw away a lot of plastic toys and action figures, mostly ones that I bought while at university for the photo story that Sarah and I had a lot of fun planning out and coming up with ideas for but never actually finished. I did feel sad throwing them away, but it's not like I've got any use for them any more. I hold on to so many things from my past that I don't need or even want any more because for some reason it feels wrong to get rid of them. Almost like I feel I might suddenly return to the me of fifteen years ago and suddenly have a desperate need for that stuff again.

Happy Year of the Ox everyone! It's my mum's year! We were talking about the Chinese zodiac at work on Friday and I discovered that my colleague is a pig like me so I looked up what characteristic we're supposed to have. Apparently I seek out social situations whenever possible and will stay up all night cleaning a messy room cos I'm so organised. You know, I'm getting the feeling that it's almost like astrology might not be entirely accurate...

Speaking of organisation (or lack thereof), I am continuing on with my decluttering mission. At the moment I'm trying to empty out cupboards and drawers of stuff that's been sitting in them untouched for literally decades. Then I'll have space to put away the things I actually use that have been cluttering up other areas of the house. I am slightly worried that by putting the new things away I'm condemning them to the same fate of being forgotten for years though. I have a real problem with object permanence and once something is put away I often forget it exists. So my plan is to try and put absolutely everything away so I have to go and get things when I need them. My hope is that, by doing this, I'll keep the items and their locations alive in my mind and will be much more efficient with my use of space and storage. Of course once this is done I'm going to have to keep on top of it and be careful not to leave things out cos I know myself, I'll just end up using those things again and again and forget everything else.

Having said all this, I'm almost doing the opposite with some items. Often when I get given something as a present or bring it back from holiday I'll think it's too nice to use and should be saved for a special occasion, so I'll put it away to keep it safe. But that's stupid cos then I end up forgetting about them and never using them and they goes to waste. I don't want to re-clutter the place with these things, but I do want to put them in locations where they I know where they are so they can be seen and used, rather than shoved in a box at the back of a cupboard doing nothing.

I have far too many cupboards full of stuff that's doing nothing.

One area I'm really struggling with is my clothes. The logical part of my brain says I should just clear out my wardrobe of all those goth-y clothes I haven't worn in ten years and probably never will again, but they're just so pretty. I also have other things that I haven't worn in so long but every time I go to get rid of them I start thinking that I might want them in the future. I have finally made myself throw away things from my childhood that would obviously never fit me again but I kept cos of pointless sentimentality, so that's progress at least.

Other examples of progress include getting rid of boxes that I've held onto for years for no good reason and throwing away my soap collection. When I was a kid I collected different shaped soaps and I kept feeling like I couldn't get rid of them cos they'd been so important to me in the past. But they were just old soaps covered in dust taking up space that I could use for other things, so in the bin they went. (I did consider using them as actual soaps so they'd at least be useful, but they were really old.) 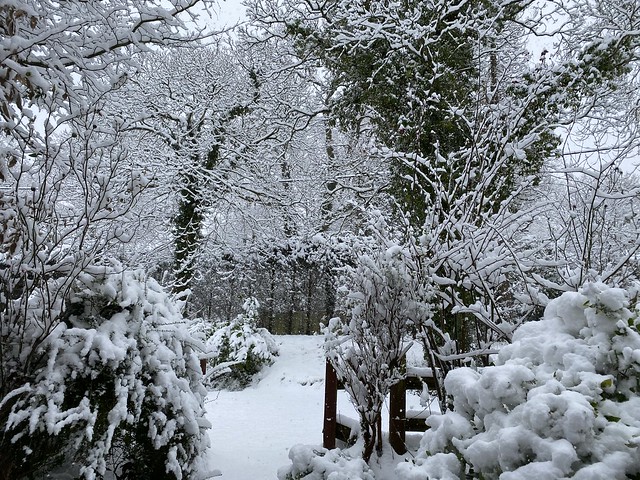 The promised snow arrived yesterday and looked very pretty. The promised sleet did not follow so there was still a white blanket over everything this morning. Apparently we're due more next weekend as well.

In news that will surprise precisely no one, I haven't made much progress on my New Year goals. But I have been making a lot of progress in my mission to declutter the house. I'm very much a packrat, a trait which I inherited from both my parents, so our house has an awful lot of stuff in. I cleared a lot of it a few years ago after Dad died but it's piling up again and I need to do a better job of letting go of things that I haven't used in years but for some reason convinced myself would be useful or important some day. I think I'm finally getting there now and I'm feeling quite good about it. I just hope I can keep up this momentum and not fall back into old bad habits.

Work has been quiet recently, which isn't surprising, so my hours have been cut right down. I'm actually quite happy about that at the moment cos it means more time to focus on the house but I hope it's not going to be permanent. I'm not too worried yet cos this has happened before and my hours always go up again, but I will admit to being slightly concerned considering what's happening to a lot of people and businesses right now.

And finally, it's Burns Night so I'm enjoying a wee dram of whisky. And wishing I could go back to Scotland again. I love Scotland.
Collapse