I have returned from London! I do plan to make a proper entry about my trip when I get a chance, but I just wanted to pop online today to mark my birthday and re-introduce the epic poem of birthday brilliance that I have sadly neglected for the last few years...

I have a lot of awesome presents, including a hedgehog house that I'm going to have to find a place for out in the garden, and the Dr Eleventh Mr Man book, which is really the story of River and Eleven on a fun- and danger-filled date and I love that!

So now I shall sign off and enjoy the glass of cava I am currently drinking to celebrate the occasion of my birth. Cheers!

I have to say, based on the adverts and all the build-up, I expected Downton Abbey to have been a bit more wrapped up last night than it turned out to be. I suppose Mary getting married was something, even if it did happen ridiculously quickly, but all their declarations of love fell a bit flat cos Henry's left no impression on me whatsoever and it felt like their wedding came out of nowhere. I know their romance has supposedly been building all season, but it hasn't felt like it. (In fact this is the first time all year I've actually remembered his name, which says a lot about how invested I've been in this storyline!)

At least they finally acknowledged that Mary might have some issues being married to a man who races cars when her first husband died in a car crash. Of course this only merited a short scene and then it was all forgotten again, but still. That's probably the best you can hope for with Downton now.

And I still think Bertie's going to go back to Edith. That's going to happen in the Christmas special. It has to.

Anyway, onto the November meme. Topic 5 is Favourite Romantic Pairing:

Now, I know I've been saying that pretty much every single topic so far is a tricky one, but this is definitely the hardest yet. Shipping is such a huge part of my fandom life and, as with TV shows, I usually go through stages of being super obsessed with a ship for a while before finding a new one and becoming super obsessed with that, but just because my super-obsession has moved on doesn't mean that I don't still love the old pairings or ship them any less. So rather than trying to pick one, I'm going to go with a top ten eleven in no particular order:

Even this was difficult and I keep thinking of other pairings that I could have put on the list. I may have a bit of a shipping problem...

ATTENTION FANDOM-LOVING FRIENDS WHO ARE NOT ALREADY OVER AT FANDOM MARCH MADESS! GET YOURSELVES OVER TO FANDOM MARCH MADNESS! THE PRELIMINARIES ARE OPEN AND PEOPLE NEED YOUR VOTES!

IF YOU ARE UNSURE WHO TO VOTE FOR, I OFFER THE FOLLOWING SUGGESTIONS:

THERE ARE MORE, OBVIOUSLY, BUT I'M NOT GOING TO BORE YOU WITH ALL THE CATEGORIES NOW. BEST THING TO DO IS GO THERE AND SEE FOR YOURSELVES!

Today I built the Lego Hogwarts Castle. This year is already awesome!

Although not for my brother. He's halfway through a skiing holiday and today he phoned us from an ambulance! He'd fallen badly and called again later to give us the news that he's dislocated and fractured his shoulder. Ow.

In completely unrelated news, there's now a Battlestar Galactica Online game. I tried it yesterday but gave up after five minutes because it was so unbelievably boring. Maybe it would have been better if I'd been a Colonial. (I chose Cylon, not because I have a preference for them but because after being a Cylon almost every time I've played the BSG board game I've now accepted the inevitable truth that I am in fact a total frakking toaster.)

But maybe that's a good thing. I don't need another distraction!

Pick five of your favorite shows, in no particular order, before you read the below questions, then answer them!

And today being Thursday, that means Bones is on tonight! Yay! Of course there's also a new episode in America too and I'm going to have to be good and resist spoiling myself for it. This wasn't much of a problem before because I didn't have any other Bones fans on my flist, but that's changed now (yay!) and it's going to take more of an effort from me to avoid reading about it. Of course if I get really desperate I could always never even consider downloading the episode off the internet. Because that would be wrong.

Speaking of TV, I've also started re-watching Dark Angel on DVD. I was a bit worried that it wouldn't be as good as I remembered but it so is. Unfortunately season two sucked monkey balls so I probably won't be buying that. As I mentioned in my Ships of the Noughties list, Dark Angel was one of those shows where season one was absolutely amazing and almost turned me into a complete wreck over the summer waiting to see what happened, only for season two to be a bitter disappointment.

AND AND! While I was watching the pilot I caught a glimpse of a guy and went "Is that Gaeta?" and it was! He looked absolutely ridiculous!

On the ear-front, I still can't hear properly and it is still very annoying and sometimes awkward. But the antibiotic drops seem to be doing their thing for the infection and my ears are nowhere near as painful as they were before, which is a Very Good Thing. On Monday the nurse took a swab of one of the ears to send off to see what the problem is and if we'd have to change the treatment and she told me to call today for the results. So after a lot of anxiety about having to use the phone, I called up only to find the results aren't back yet. Great. So I'll have to call again some time next week.

But for now I am going to enjoy the fact that it is Thursday and I don't have to work tomorrow. Which, considering how busy it was today, pleases me greatly. =D

picspammy challenge is Fifty and as I'm a big shipper I thought doing 50 Shippy TV Moments would be a good idea. I've never actually posted to the community before so I'm a bit nervous about this though.

Anyway, here's the picspam. I hope you like it! And if you disagree with any of my choices or think I've left any obvious ones out please say so in the comments.

You know this would have been a lot easier if I watched 24. That show seems to go through a ridiculous number of presidents.

Ok, so I'm really getting into this list thing, although I do wish I could think up a better name for them than 'lists'.

This time I have done a picspam celebrating my favourite redheaded ladies from television. 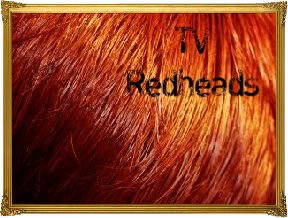 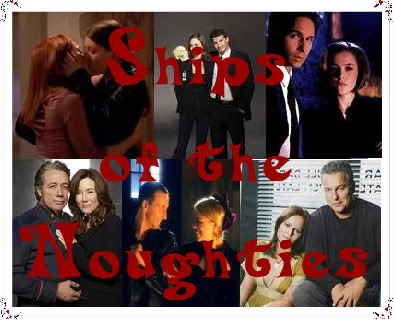 This list came about because I was watching a programme about the greatest TV shows of the decade. It was a terrible list that made no sense and made me quite angry so I decided to write my own. But instead of TV programmes I decided to do pairings that I’ve supported from the past ten years. They bring me squee and sadness in equal measure yet I still ship my little heart out.

The Rules: For a ship to be included it must have existed, at least in part, during the ten years spanning 2000 to 2009. So ships from programmes that started in the nineties and ran into the noughties are ok, but ships from programmes that finished before 2000 are not, even if I discovered/continued shipping them in the noughties. (Sorry Maddie/David.)

Because there was no way I was going to be able to put these in order of preference (I love them all!) I’ve listed them in chronological order instead: