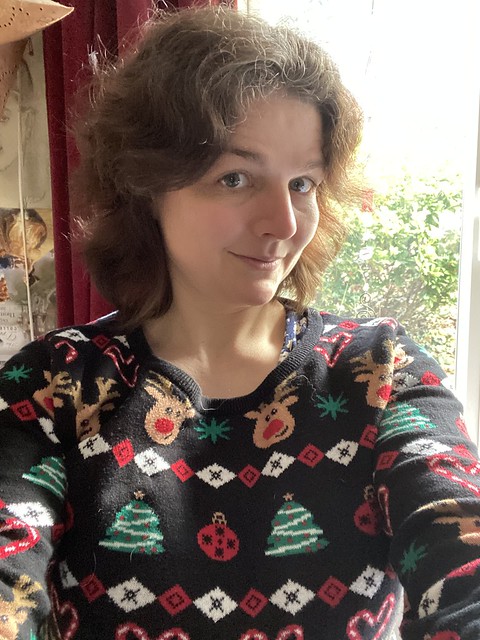 I had the crazy idea that I might take selfies to document all the different jumpers I wear throughout the month, since I have a wide selection. Time will tell if I'll actually follow through with that though!

It's also the first day of Advent calendars. We don't have quite as many this year as we have had previously, but we still have a good selection:

It's the end of November, which means it's the end of NaBloPoMo so you won't have to suffer my posts quite so regularly after this. At least not until next November!

I had hoped to have Mum's advent calendar made up and ready to go by now, but I had unexpectedly longer shifts at work so I haven't quite put all the final bits together. It's still on track though, so should be ready for tomorrow. Just maybe a bit later in the day than I'd planned!

Also tomorrow is the start of Christmas jumpers at work. I look forward to cycling through my rather extensive collection!

Every year I like to go up to London and have a fun festive weekend with Paul. We didn't do it last year for obvious reasons, so I was really glad we got to do it now. It was a bit earlier than usual, but that's fine. I've embraced the Christmassyness in November! 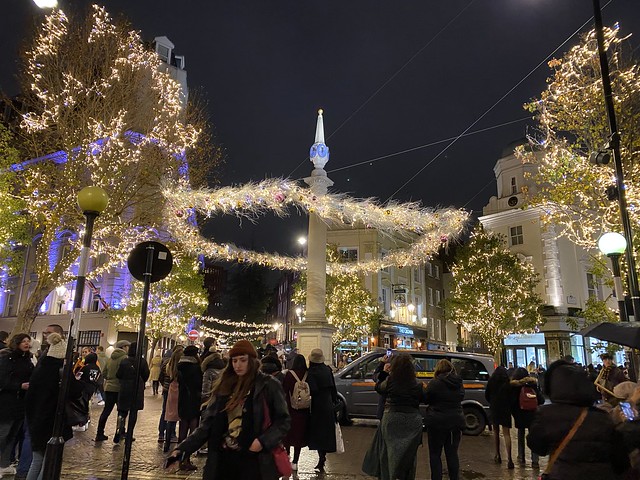 My festive weekend has come to an end. It was a lot of fun and I do plan to make a proper post about it hopefully sometime soon. I’m now feeling a bit low though, partly cos it’s over and I’m sad about that, but also partly cos I’m worried that I was annoying and Paul’s glad to be rid of me. I hope not but I can’t help thinking it.

Today I went to a Christmas fair, made a candle and cocktails, and had steak for dinner. Now I’m on a train and really wishing I’d booked a hotel room in central London!

Day one of our Festive Weekend found us at Incognito Kingston where we had absolutely insane cocktails. Paul’s first one was served in a diver’s helmet. I loved it!

The end of the evening was more traditional and I finished with a mulled wine. I’m so happy we can do this again!

Me: Hello, National Rail site. I would like to check what train I can get to travel from Surbiton to Farnham on Sunday please.

National Rail: You have to get a train from Surbiton to Weybridge, then a 52 minute bus ride from Weybridge to Guildford, then a train from Guildford to Farnham. It'll take you two hours.

Me: But there's a direct train from Surbiton to Guildford. Why can't I just get that instead of the bus?

Me: Seems weird, but all right. It's worth it not to have to be on a bus for nearly an hour. I would like to buy those tickets please.

Southwestern Railway: You want to go from Surbiton to Farnham on Sunday? Yeah, just get the train to Guildford and change there. That'll be £10.

Tormund is currently cuddled up in the blankets on the sofa and looks so comfortable it's making me jealous. 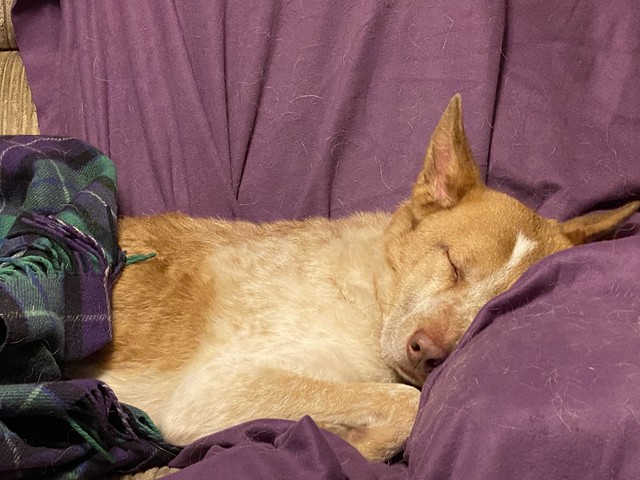 Poor boy has clearly had an exhausting day!

The engineer had said that he couldn't get the radiator in my room to work cos he couldn't bleed it with the shelf in the way. I suspect that was just an excuse cos he knew it had bigger problems that he didn't want to deal with!

I managed to bleed it myself by using a rear access key. That then made the boiler stop working, because of course it did. The useful little panel at the front told me it didn't have enough pressure and needed to be refilled, so I had to Google how to refill a boiler. I found a handy YouTube video showing me how to do it and yet again wondered how we coped before the internet!

Unfortunately this did not help my radiator at all. I did some more Googling, which led to me taking off the TRV valve and seeing if that was where the issue is. I can move the pin up and down but it doesn't spring back. And moving it up doesn't make a difference, which I thought it should do. So I think the whole thing is probably knackered. I shouldn't be surprised. Like everything else in this house it's about a billion years old and should probably have been replaced years ago. I suppose I could see if I can just get someone to install a new TRV but I think the radiator itself probably needs replacing too. So now I have to decide if I want to go through the stress of all that or just accept that I have no heating in my room!

I saw the Coca Cola Christmas advert last night (or part of it, at least), which means it's officially Christmas. I'm ok with that cos I've decided that if I'm going to enjoy as many Christmassy things as possible then I need to start early. I'm not going so far as to begin decorating the house yet, but I am enjoying the festive fare currently found in supermarkets. And I did watch the Ted Lasso Christmas special the other day without it feeling seasonally inappropriate!

I'm also making good progress on Mum's advent calendar. I'd been struggling with it for ages and couldn't seem to come up with anything good, but once I worked out a basic idea it flowed a lot better from there and now I'm pretty confident I'm going to have something that works well. I just hope she likes it too!
Collapse